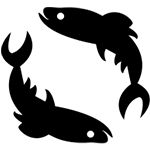 In January, you will be able to work to the best of your ability, and then some more, at all times! You will be extremely inspired thanks to the Sun/Neptune sextile. Accept every task you may be asked to take care of. Never moan! With the Sun, you will never run out of energy. However, your love life could be slightly disappointing under the Venus/Neptune square!

With the sextile of Venus, you will simply go with the flow on the sentimental front this February. Brainy one second and sensual the next, you will make the most of what this month has to offer! On the financial front, my Pisces friend, you will always find a way to put your doubts aside and take a few risks! A giant leap forward is to be expected…

Under the Sun/Neptune conjunction opposite Jupiter this month, your ego will get its wires crossed and your love life will find itself under attack! You will be to blame for a sentimental failure. Pull yourself together, and quick. In the workplace, you will spend most of your time blowing hot air. You will be second to none when it comes to pretending being busy!

In the workplace, the square of Mars and opposition of Jupiter will have to be skillfully dealt with. April will be an extremely unstable month on the professional front. And you will not find it so easy to cope with various difficulties. A million thoughts will be going through your mind at the same time! Sort your head out.

The month will be split into two very distinct parts. Early on, the Moon/Jupiter opposition square Mars will make you slightly too emotional and sensitive. You will be weak and nervous on both the sentimental and professional fronts. A clay-footed giant! Then, from the 15th onwards, you will have no choice but to adopt a new behavior.

With the Venus/Neptune square in June, you will either drink too much energy drinks, alcohol or take too many tranquilizers depending on your personality. Unfortunately, your stoical appearance will be no more than a front! With all those planetary dissonances, you will run out of energy this month. My Pisces friend, please quickly find a way to bounce back up!

In July, the Sun/Neptune trine will act as the anticyclone of your planetary sky. You’ve been asking for its help for a long time, and it’s finally here! Constructive conversations and compromises will be on the cards in every domain. Make the most of such a harmonious atmosphere while it lasts, good things always come to an end…

The Mercury/Neptune opposition will be to blame for all of your financial problems. Indeed, between potential thefts and ill-thought investments, August will not be an easy month. You will lose control of your finances. You will have plenty of obstacles to overcome as far as money is concerned this month!

In September 2016, you will be unsettled by the Mars/Saturn square. You will feel just like a receiver unable to score a touchdown this month. Even worse, you could start lying about some of your so-called exploits on the professional front! Be careful not to find yourself in the hot seat!

Learning how to be independent will be necessary if you want your partner to truly love you. The Venus/Neptune trine will be an excellent justice of the peace. As a result, your efforts will pay off in spectacular fashion in the spring. But don’t forget to show off your charming nature until then…

My Pisces friend, the Sun/Neptune trine will incite you to build solid foundations for your professional life during the month of November. You will have to take the time to have a proper look at interesting opportunities coming your way this month. Not doing so would be a huge mistake! Bear that in mind…

You could decide to stay in the background in December in a strategic attempt to recharge your batteries! With the presence of the Moon/Saturn sextile, you will literally become addicted to energy drinks! Feeling like they allow you to push your limits, everything will seem possible to you during this final month of the year…